Tiago Silva entered in the role of a fashion model

The most expensive football player in Bulgaria - Tiago Silva from Brazil, who will play in the Italy next season, was the attraction in the show for the opening of the new shop Bobo Zander sport, situated in the prestigeous shopping center TZUM.

He entered the role of a model together with the girls from "Ogledala" and received the applause of the guests of the event.

Especially for the opening of the shop arrived from Spain Mrs. Bulgaria 2006 - Eleonora Mancheva, who shared that the clothes with the brand name Bobo Znader are her weakness and she can not resist them.

The pop singer LiLana , who recently conquered the music charts with her new single and video "Here I Go", recorded together with the European dance stars Silver, also turned to be one of the admirers of the brand.

The opening of the new shop Bobo Zander sport in TZUM is a part of the progressive growing trade network of the brand. By the end of May will be opened two more shops in Varna and Sunny Beach. 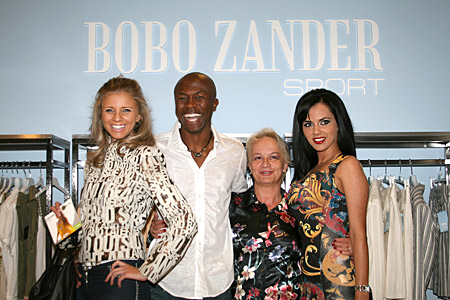