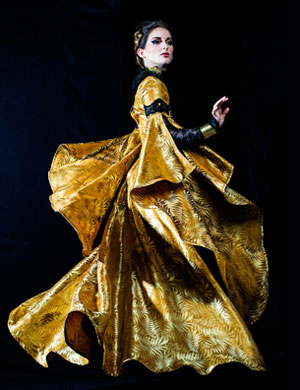 Couture fashion designer Evgenia Luzhina will present her latest collection entitled “Nostalgia” during the upcoming Couture Fashion Week New York. A returning favorite designer at the event, Ms. Luzhina’s fashion show will be held at 4:00 pm on Saturday September 12, 2015 at the Crowne Plaza Times Square Manhattan. The show will include live music by award-winning musician and composer Serge Khrichenko.

A native of Moscow, Evgenia Luzhina received a B.A. in Fine Art and Design from Moscow Art College. She served as Resident Set and Costume Designer for the Moscow Chamber Forms Theater. While there, she designed numerous productions which were staged in Moscow, Los Angeles and Washington DC. In 1991 Ms. Luzhina moved to the USA where she continues to exhibit her extensive experience in Art and Theatrical Set and Costume Design. She has been a costume designer for more than 30 years, working for different theaters in Russia and Unites States where she has created costumes for more than 50 plays.