Luca Magliano is the winner of Who is on next? Uomo 2017

At this edition, Pitti Italics – the Fondazione Pitti Immagine Discovery program that promotes and supports new generations of fashion designers and the most interesting brands that design and manufacture in Italy – is shining the spotlights on MAGLIANO.

Luca Magliano, winner of Who is on next? Uomo 2017, presented the new collection by his name brand at a special event during Pitti Uomo 93, with a debut fashion show at the Dogana. 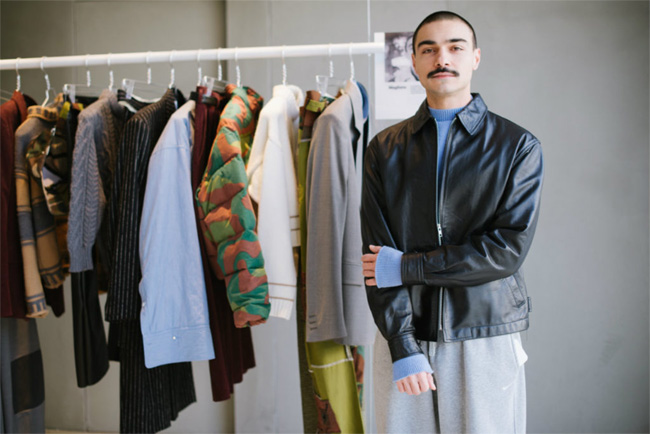 The keynote of the collection “Guardaroba per Uomo Innamorato” – The Wardrobe for a Man in Love – is an editing of what’s essential in men’s wardrobes today.

“I am very proud to be able to present my collection with a fashion show, a first for the Magliano label, in such a special milieu as Pitti Uomo”, says Luca Magliano.
“For fall-winter 18-19, I want to tackle the theme of the wardrobe for the man in love. A sort of cartoon story in a punk key that portrays a man wanting to express his romantic side through every emotional phenomenon that is triggered or fueled by his clothing. Love, be it romantic, erotic, true, glamorous, political…evocations that go from the sailor to the American sex symbols of the 1950s and an eclectic inspiration that links with figures from history, literature, film and art as well as fashion icons. My research started from the great classics for men, with studies of silhouettes from the 1990s and references to the glamour of women’s clothing when it comes to line and structure.”

Luca Magliano lives in Bologna where he was born and where he studied at L.UN.A. (Libera Universit? delle Arti). After a period in Milan, he went back to Bologna to work with stylist Manuela Arcari designing the Hache and Ter et Bantine lines. He showed his women’s wear collection for spring/summer 2016, “I Was Naked” in Paris, and the following year he signed his first capsule collection for men, Magliano, that is made by Arcari e co. www.magliano.website.

PITTI ITALICS is a program sponsored by the Centro di Firenze per la Moda Italiana with a grant from the Ministry for Economic Development (Ministero dello Sviluppo Economico) and Agenzia ICE; it is produced by the Fondazione Pitti Immagine Discovery on the occasion of Pitti Immagine Uomo 93.