Paris – In a certain sense, really good designers like really good artists and film directors, often make one extended work of art, and each show, opening or movie is just part of an extended commentary on the human comedy. 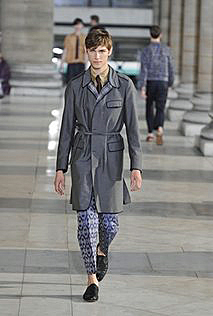 That felt very much the case Thursday, June 25, at the rain-interrupted menswear show by Dries Van Noten, the latest opus from a designer whose ethnic inspired globe-trotting gentleman style was again elegantly on display.

Though staged in Palais de Brongniart, site of the former Paris Stock Exchange, the clothes had no sense of any business gent. This was a triumph of the new understated sophistication, a collection where subtlety not sass counted.

The collection introduced a natty new suit, whose silhouette will be very influential - pants cut loose around the thigh and above the ankle, jackets cut short at the hip and wide at the lapel, a very fresh approach that will flatter all sorts of guys.

Van Noten completed his half-century of shows two years ago, and throughout his career he's been a master of mixing rough ethnic fabrics with noble materials. From that point of view, this collection was exceptional - pairing batiks, madras checks, macro jacquards and some beautiful ikats with Oxford gent pinstripes, cotton pique and a refined linen alpaca mix. The designer added a great dose of panache with lots of fabric shoes and boots, a big trend on European menswear runways.

Without doubt the market will be kinder to this collection than the weather, as a sudden downpour forced the house to move the runway back behind the Corinthian columns of Bourse, instead of out at its entrance.

"Tailored, elegant, sartorial but also ethnic," said Van Noten, with the justifiably easy air of a man who knew he had just staged a commercial and aesthetic hit.