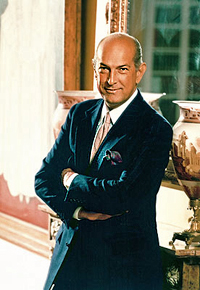 The designer is to be honoured for his contribution to the industry and will be presented with his prize at a star-studded gala at New York's Cipriani restaurant on October 22.

Margaret Hayes, president of The Fashion Group International, told WWD: " Oscar personifies the word 'superstar'. While this award honours his lifetime achievements, it is also in recognition of the vitality and creativity clearly apparent in his current collections."

The ceremony's theme is 'The Storytellers' and will be hosted by Barney's window-dresser Simon Doonan.

Oscar has won numerous awards before, including a CFDA Lifetime Achievement Award and is a two-time winner of the American Fashion Critic's Award and was inducted into the Fame in 1973.

He serves as a board member of the Metropolitan Opera, New York Opera House, Carnegie Hall, and WNET. He is also on the boards of several charitable institutions including New Yorkers for Children, the America's Society and is presently chairman of the Queen Sofia Spanish Institute.