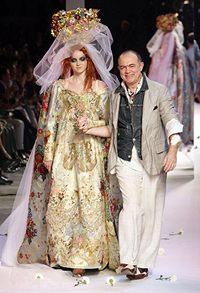 The fashion house went into administration in May - slashing its workforce from 124 to just 12 in a bid to cut costs - and potential buyers will be evaluated by a court in September to decide who will assume control of the label.

Favourites to take over are believed to be the Italian Borletti Group, whose last minute bid was being treated as "serious" by administrators. Financial assessors have already thrown out an "unsatisfactory" offer from French turnaround firm Bernard Krief Consultants, along with two bids of one euro.

The only other remaining option for the company would be if current owners, US-based Falic Fashion Group, launched a restructuring plan, though this would mean reducing the work force by around 90 per cent and effectively turning the fashion house into a licensing operation.

The house's Autumn/Winter 09 Haute Couture collection was privately funded by the designer himself and each model was paid just 50 euro to take part in his shows.

The designer said at the time: "I didn't want to cry. I want to continue, maybe in a different way, with a small atelier. What I really care about is the women who do this work."

Lacroix - which singer Christina Aguilera wore for her 2005 wedding to Jason Bateman - has never turned a profit and reported a 10 million euro loss in 2008.