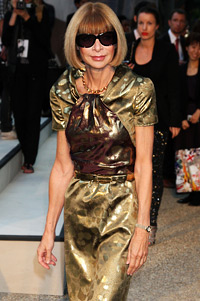 The US Vogue editor – who is regarded as one of the most influential voices in the fashion world - empathises with new stylists and designers because the fashion market is currently swamped with impressive talent.

She said: “Now is not an easy time to start as a young designer - unless you are very special and dedicated, and not afraid of hard work.”

The magazine chief says upcoming designers must question their determination and longevity before committing to a fashion career as it is growing increasingly difficult to become an established name in the industry.

She explained to Britain’s Daily Telegraph newspaper: “Talent is obviously important. But you need someone with personality, too, someone who is willing to listen. A designer really needs to spend five or 10 years learning the craft, learning the business. Sometimes you can get someone who has become a huge star overnight, but it is so rare that it works. Sometimes a lack of understanding, a certain naivety about the business can be refreshing, but it so often doesn’t work. People can get carried away with what is new and young and different, but unless you are someone like Marc Jacobs, you should think long and hard. So many are struggling.”