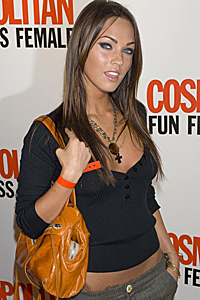 The 'Transformers' beauty has stripped off for a series of raunchy photo shoots for the Italian fashion house, with the black and white adverts out in January in time for their Spring/Summer 10 worldwide campaign. The news comes just days after it was revealed former Spice Girl-turned-fashion designer Victoria and her soccer star husband David Beckham had decided not to renew their contracts with Armani.

The couple appeared in a series of sultry black-and-white shots for Armani and it is now thought Victoria is planning to design a collection of lingerie for her own fashion line, dVb, while David is believed to be in talks with another company to launch his own range of men's underwear. LA Galaxy player David has been replaced by Real Madrid soccer star Cristiano Ronaldo, who will strip off for the fashion house's Spring/Summer 10 worldwide campaign.

The 24-year-old Portuguese-born athlete will also model jeans, Armani has revealed. However, Megan and Cristiano will not appear in the campaigns together.