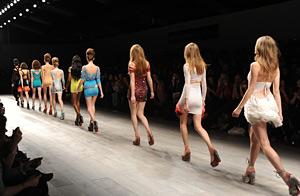 London has overtaken New York as the world's fashion capital for 2011, fueled by media interest in late British designer Alexander McQueen and Kate Middleton, according to a survey by the Global Language Monitor. London moved up from third to first place in 2011, ousting New York from the top spot it had held in the survey for several years.

The former Kate Middleton has become an international fashion icon following her engagement and marriage in April to Britain's Prince William. McQueen committed suicide in 2010 but his fashion brand has lived on. The new Duchess of Cambridge's wedding dress was designed by Sarah Burton, artistic director for the Alexander McQueen label.