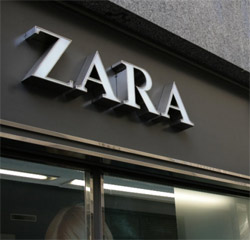 The profit of the brand Zara, owned by the Spanish textile giant Inditex, has increased by 1% for the first 6 months of 2013 - compared to the same period of the previous year, and reached 951 millions. Sales rose 6%, reaching 7.7 billion.

But the cost of the textile giant rose to 2.9 billion euros for the period of comparison. Inditex covers several brnads like Zara, Pull & Bear, Massimo Dutti, Bershka, Stradivarius, Oysho and Zara Home with a total of 6,104 stores / 5,693 earlier /. The results of Inditex help the company to stand well in the market, although the conditions in Spain, which failed for two years to get out of the the recession and the unemployment rate reached 26.26%.

The first Zara store was opened in 1975 in La Coruna, northwestern Spain, where, and to this day there is the headquarters of the company. The 77-years-old founder of Inditex Amansio Ortega, according to the magazine "Forbes", is the third richest person in the world with 57 billion dollars. He retired from the management of the conglomerate in 2011 and remained Pablo Isla to the affairs of the company.