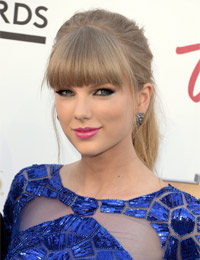 Taylor Swift will perform at this evening's Victoria's Secret show, which will be performed in New York. The star will join Fall Out Boy, A Great Big World and Neon Jungle at the annual fashion spectacular.

In August, speculation emerged that One Direction were set to be this year's big headliner act, although rumours were quickly squashed by the brand. Swift will follow in the footsteps of Rihanna, Justin Bieber and Kanye West.

The 2013 catwalk show is expected to be the brand's biggest to date, with Candice Swanepoel, Alessandra Ambrosio and Doutzen Kroes all hitting the runway. Swanepoel has been given the honour of wearing the Royal Fantasy bra - a piece always showcased by the most famous Angel - worth $10 million.