International Conference Fashion Futurum: Young Designers as a Key Factor in the Growth of Creative Economy

The business program and international conference Fashion Futurum opened with the discussion New Faces of Fashion: Young Designers as a Key Factor in the Growth of Creative Economy on 14 March 2016; the following issues were raised within the discussion - demand for young brands, efficiency of the e-commerce strategy, financial support and development routes. 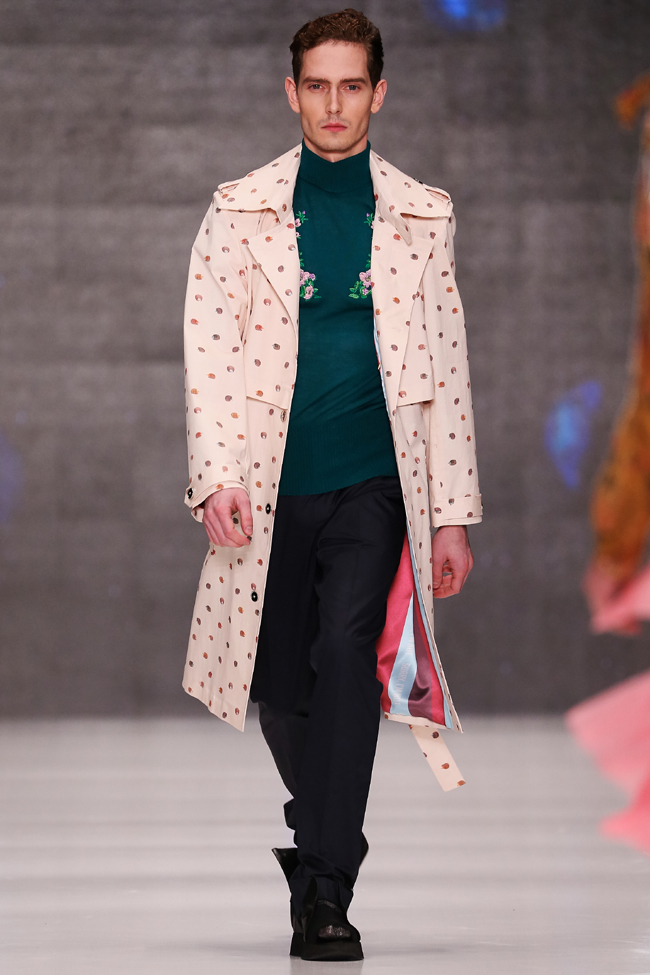 A model walks the runway at the SORRY, I'M NOT fashion show during day 2 of Mercedes Benz Fashion Week Russia FW16/17 at Manege on March 12, 2016 in Moscow, Russia. (Photo by Oleg Nikishin/Epsilon/Getty Images)

Among the speakers of the discussion were Founder and CEO of Not Just a Label platform Stefan Siegel (Great Britain), CEO of Studiozeta showroom Mauro Galligari (Italy), Head of Vogue Talents Sara Maino (Italy) and Director of IMG Fashion Russia Liudmila Taborskaya. Participants of the discussion agreed that demand for small and unusual brands had been significantly growing in the last 5 years. Mechanics of the search and promotion of young talents and market in general witnessed tremendous changes. With the development of social networks and Instagram at use, it became easier for on-line stores to make a statement, to search new contacts, do sales and recruiting. Sara and Stefan are sure that now is the time of outstanding opportunities for young talents to learn and build the business. Investors and Internet platforms are open for collaboration and can help young people at the stage of professional make-up. Mauro also pointed out that the time of loud names was over, the era of permanent search for the new started, the new that would move 'fashion engine' forward. Speakers were almost completely consistent in the opinion what criteria the recruiters put forward looking for 'a new blood': good quality of products, the new attitude and obligatory message possibly bound to the national culture. According to speakers, it is not a must to graduate from specially oriented colleges to start a career in fashion design. Talent, active behaviour, professional team and thorough understanding of industry (which can be successfully obtained on internship in big companies) are enough. There is no need to produce 6 collections per year like some giants do, at the beginning it is very important to know your business well, give credit to advertisement and choose good platform for placing the product. As a rule, after one or two seasons it becomes clear whether there is a demand for the brand and whether it can commercially succeed. Never forget that the fashion show is not a finale but the very first step on the route of building the successful designer's career.

The next on the agenda was press-conference on the subject Fashion Design Priority: Unleashing Creativity in a World Where Nothing is Actually New. Stephan Rabimov (Director of Fashion Journalism & Social Media Center at the Academy of Art University in San Francisco) acted as the host of the press-conference and set the pace of the talk. Speakers touched upon some topical issues so critical for contemporary designers, spoke about earning capacity, commercialization of fashion, and media impact. 'Everything that is happening in the world impacts fashion' underlined the speakers continually. Covadonga O'Shea (Founder of ISEM Fashion Business School in Madrid, author of the best-seller Zara Phenomenon) underlined that to find out the future people should learn the past. Designer Denis Simachev shared that contemporary designer should be flexible and 'have more professions in store': designer should be able to illustrate, to write, promote, edit and direct, if required. Digital Director of Visionaire, independent magazine about fashion and art, Lars Petersen spoke about the perspective of wide implementation of Virtual Reality. Speakers also touched upon the subject of fashion dependence on geographical location.

Russian designers participated in a detached public talk with the Head of Vogue Talents Sara Maino. Sara shared with the audience how the system of talents' search worked from the scout's side and how a little known creator could show the world his/her skills placing a video at the Italian Vogue website. Young designers who showcased their collection at the 32nd Season had the chance to ask their questions. Vogue Talents involved multiple creative projects and helped attract public attention to many interesting brands. 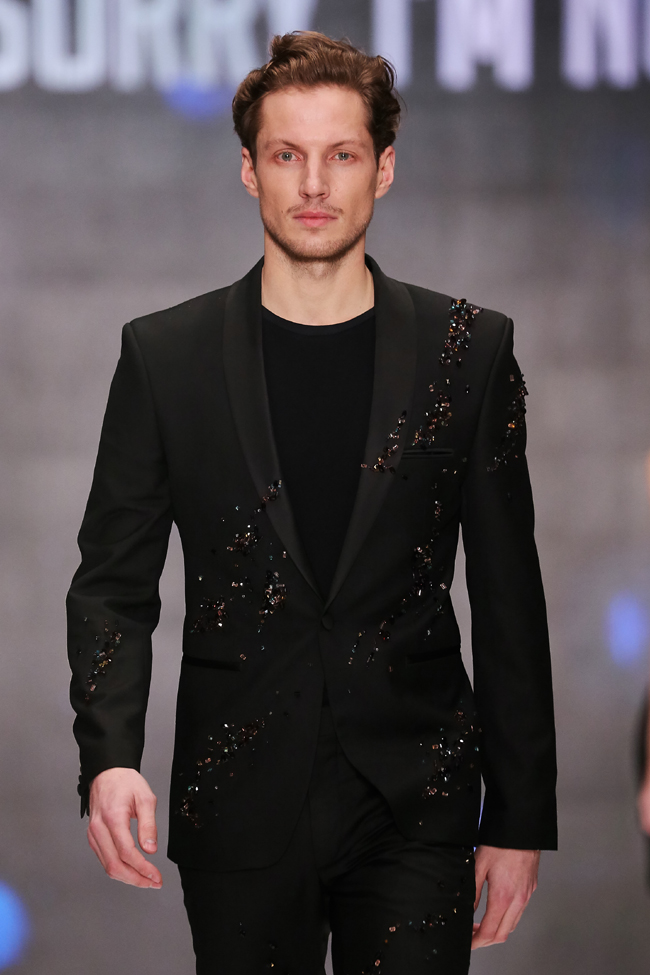 A model walks the runway at the SORRY, I'M NOT fashion show during day 2 of Mercedes Benz Fashion Week Russia FW16/17 at Manege on March 12, 2016 in Moscow, Russia. (Photo by Oleg Nikishin/Epsilon/Getty Images)

The subject of fashion geography was continued at the discussion Cultural Codes for Fashion City: Role of Fashion in Modern Metropolis. Alexander Shumsky (Executive President of Russian Fashion Council) leaded the discussion and addressed the audience with the questions about fashion's spot in modern culture. Mario Boselli told about Milan and 5 reasons why Milan became the capital of fashion. Nadya Valeva (President of the European Fashion Council) talked about the specifics and functions of the European Fashion Council with 24 countries-participants. Alexander Kibovsky (Head of Culture Department of Moscow Government, Minister of Government of Moscow) answered the questions about the problematic issues in copyright, about the topical issue of copying. Piia Lehtinen (President of the Board of Design District Helsinki) supported the discussion and also answered the questions from the audience pointing out that 'fashion is a part of the visual culture just like design.' Apart from that, she underlined the importance of interaction between fashion and business.

The program was continued by the press-conference on the subject so crucial for beginning designers New Standards of Education in the Fashion Industry: What does a Fashion School Graduate Need to Know to Succeed? Among the speakers who attended the press-conference were Barbara Trebitsch (Head of Fashion School of Domus Academy), Danilo Venturi (Dean of Polimoda Fashion School), Sara Azzone (Director of the Campus of the European Design School IED in Milan), Giulia Bedone (Director of Instituto Marangoni Shanghai Training Centre). Natalya Pochinok (Rector of Russian State Social University) leaded the talk. Among the discussed issues: flexibility of designers, long-term perspectives, the aspiration of every graduate designer to open his or her own business and enter the fashion market. 'When one studies design, it is very important to be good at brand management and focus on the perspective,' numerously underlined the speakers. Irina Ledeneva (Director of Career Broadening College at Moscow State University of Design and Technologies) and Valery Belgorodsky (Rector of the above University) took part in the press-conference answering questions from the audience.

On 14 March International Conference Fashion Futurum also witnessed the meeting with Adam Katz Sinding (street style and fashion photographer, founder of Le 2 1eme) who told the audience how street style builds new marketing strategies in the new digital era. Adam spoke about promotion of brands via photographs and Internet. Frequently such kind of advertising is hidden and disguised, and very few people can detect the commercial background. It is not the direct advertising, it is the ad that impacts people's subconscious. In this regard there occurs an illusion that certain brand is more popular than others developing biased promotion history. Well-known brands are not after sales, they are more focused on reputation. Adam also pointed out that young designers should also think about promotion via street-style but such collections require outstanding quality and perfect performance.