The indisputable leader in the production of premium tea „Althaus” makes its debut in Bulgaria. This happened at an official tea degustation in „Grand Hotel Sofia”, where was presented one of the creators of collection „Althaus” Ralf Janecki. He arrived in Bulgaria at the invitation of „Sofstok” Ltd. and personally presented to the guests the nosy drink. In this masterly activity activity helped him Georgi Bundev – manager hot drinks of „Sofstok” Ltd.

Depending on your personal taste and the intended effect, black tea should be allowed to infuse for up to 3 minutes. The effect of black tea is considered “stimulating” in the first to the third minute, and “soothing” from the 4th to the 5th minute. We would like to point out, however, that the black tea does not develop its full aroma in the first and second minutes. In the first 3 minutes caffeine is released. Caffeine in tea has much slower but longer-lasting effect than the caffeine released by coffee. From the 4th to the 5th minute the TANNIN is released. This slows down the effect of the caffeine, although it continues to be released. The longer the tea infuses, the more tannin is released, not only canceling the effect of the caffeine but even resulting in the opposite relaxing effect. 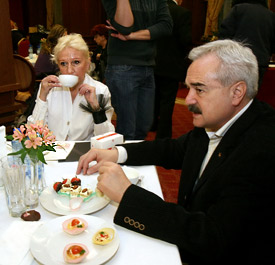 In the case of green tea both caffeine and tannin released more quickly. This is due to the fact that the tannic acids and the caffeine enter into a chemical compound during the fermentation process. This is why black tea requires boiling water, to separate this compound and release the substances. In green tea, which is not fermented, these substances are not compounded and do not need boiling water to be released. They are also more easily soluble. The effect remains the same at around 50% less infusion time.

Tea absorbs fat in the body which is why the Chinese among others always drink tea with their meals, although without sugar. Tea has a positive effect on the heart circulation. The caffeine in tea stimulates the brain and the central nervous system, whereas the caffeine in coffee puts a strain on the heart and circulation if coffee is drunk in large quantities. Tannin has the same effect as a (healthy) sleeping drug if the tea infuses for the right amount of time. Tannic acids settle the stomach and digestive system.

Tea also contains vitamins C and B1 which strengthen muscles and nerves, as well as fluoride which is well known for preventing tooth decay, and chlorophyll which has a positive effect on the production of red blood cells. These cells are responsible for the oxygen supply around the body. Since tea contains no harmful substances and has no calories, it can be enjoyed by anyone and is being used more and more often in medicine. On account of the effect it has of increasing reaction and concentration, it is known as a modern drink for “people who work with their heads”, whereby the physical effect cannot be ignored. 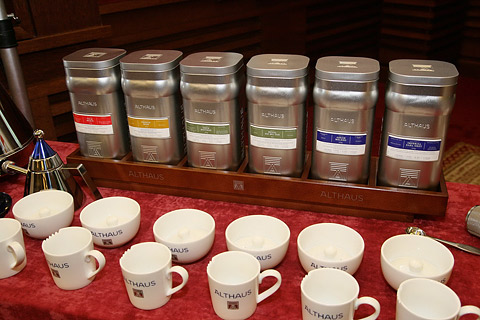