Fashion World Tokyo - a wide range of elements, from fashion sourcing to brands exhibits since its first launch

FASHION WORLD TOKYO and FASHION WORLD TOKYO-FACTORY - were held in a lively atmosphere from Oct. 22 – 24, 2018 at Tokyo Big Sight, Japan. The event attracted 976* exhibitors from 39 countries/regions, 19,952* trade visitors and 8,548 conference attendees in 3 days.

The event has offered a wide range of elements, from fashion sourcing to brands exhibits since its first launch. As a further development from its successful history, this 2018 October edition came with two titles- FASHION WORLD TOKYO, consisting 5 fairs themed categories of fashion items and FASHION WORLD TOKYO - FACTORY, a gathering of popular fashion garments/textiles companies and fashion sourcing manufacturers. The on-site meeting provides efficiently business opportunities for exhibitors and visitors.

It is a must-attend event to catch up with Japanese fashion market that became loved in the Asian market. It has also become a one-stop venue for fashion business as it covers whole fashion supply chain.

The event has become an “Asia Hub” of fashion industry

The numbers of exhibitors and visitors from overseas have increased incredibly since when the first launch in 2013. In 2018, there were exhibitors from 39 countries & regions joined to expand their brands and technologies.

In Fashion World Tokyo, which fashion brands and items gathered, there were many international pavilions from different countries such as Brazil, Germany, Korea, Mongolia, Portugal, South Africa, Taiwan and Vietnam because of the attractive market in Japan, the third largest fashion market in world. The event has become a good business chance for more and more international exhibitors. There were not only pavilions but also areas called “European Collections” and “American Street”, which gathered US & Canada Brands had also attention. Moreover, Fashion Sourcing Expo had many Asian companies from such as Bangladesh, China, Korea and Taiwan. Both overseas and domestic visitors were looking for their new OEM/ODM partners here in this huge event. 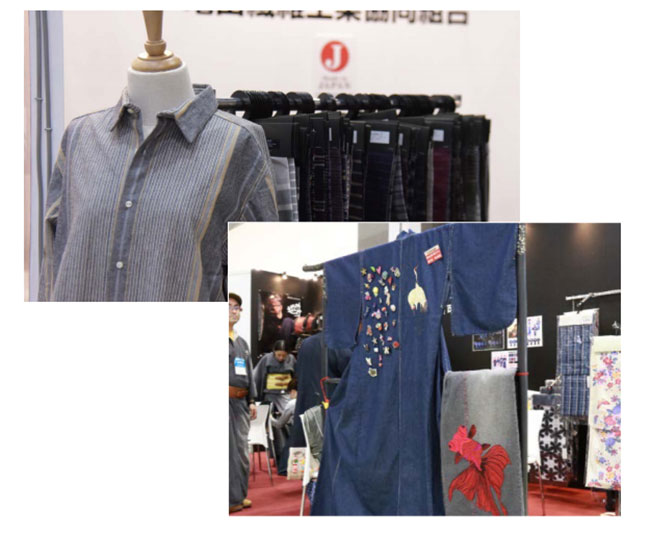 A lot of Japanese exhibitors showcased their exclusively for the event. For instance, there were kimonos made from denim for daily casual style, bags with Japanese traditional patterns, and also like in details-designed, made in Japan white T-shirts. In Textile Tokyo, there were a lot of textile & material from various areas throughout the country. For example, there was “cotton” from the company standing in Okayama Prefecture, which is famous for the texture for jeans.

Another feature is “Designers Gate”, where emerging Japanese designers gather. Visitors were amazed by the up-and-coming designs/items made by enthusiastic designers.

The event offered the best spot for manufacturers, both domestic and overseas, to look for their perfect items.

As the opportunity to learn the latest trend and know-how, the trendsetting Conference attracted 8,548* attendees in total. Mr. Kenzo Takada shared his story about the foundation and the development path of his famous brand “KENZO”. As one of the world’s top designers, he also shared his thoughts with upcoming young designers. His presentation attracted not only Japanese designers but also a huge number of foreigners. 36 sessions were held during the event, in a very much enthusiastic atmosphere.