Jil Sander will be the Guest Designer of Pitti Immagine Uomo no. 97 (Florence, 7-10 January 2020).
Lucie and Luke Meier – co-creative directors of Jil Sander since spring 2017 – will present the new menswear collection of the iconic fashion house at a special event in Florence. 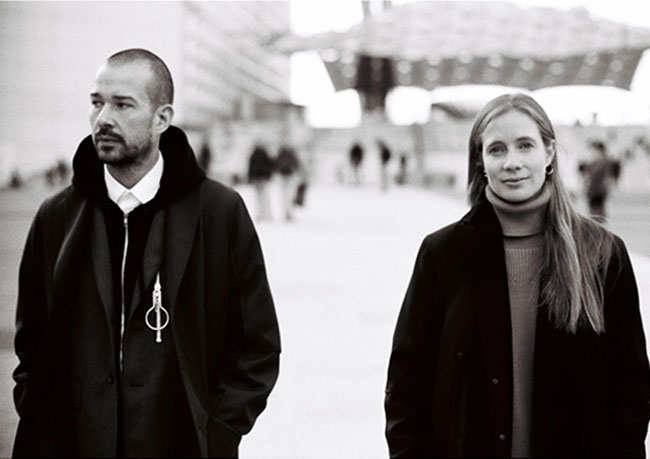 "We have following with great interest the work of Lucie and Luke Meier at Jil Sander", says Lapo Cianchi, Pitti Immagine director of communications and events.

"A very precise vision of fashion, where there is clearly a constant search for equilibrium between the respect for minimalist codes - which made the history of the brand - and the desire to incite emotion, combined with great attention to details. When they talk about their collections, it is as if they were describing a character, a complex and multifaceted individual. The desire to create clothes that last over time, is an approach that we find to be absolutely fresh and contemporary, to which the special event in Florence should be able to give a further contribution in terms of freedom of expression".

"For us, showing in Florence is both an honor and a completion", say Lucie and Luke Meier, co-creative directors of Jil Sander. "We first met in Florence, and never imagined that we would be back here together showing at Pitti Uomo. This opportunity is a truly special one, and we look forward to contributing to the legacy of this city and Pitti Uomo".

The date and the venue of the event will be unveiled on the occasion of the Pitti Immagine press road show in November.

Lucie Meier was born in Switzerland to an Austrian mother and a German father. After studying fashion marketing in Florence and fashion design in Paris, she joined the Louis Vuitton team under Marc Jacobs and, after 5 years, departed for Balenciaga and worked under the direction of Nicolas Ghesquiere. She was later chosen by Raf Simons to join his team at Dior as Head Designer of Women’s Haute Couture and Ready-to-Wear collections. After Simons' departure, she took the role of Co-Creative Director at Dior and led the development of 5 collections in this role.

Luke Meier was born in Canada to an English mother and a Swiss father. He accomplished his studies in finance and international business at Georgetown University in Washington, DC, and he continued his studies in business policy at the Oxford University in the UK. He later moved to New York City where he attended FIT. He met James Jebbia, and subsequently worked for 8 years as Head Designer of Supreme in New York. Following his position at Supreme he co-founded the menswear line OAMC that is now distributed in more than 100 of the best selected stores in the world.