On 27th May 2021, the EU COSME project CirCoAX by CircularInnoBooster will be presented at the conference “Circular Economy: sustainability and new jobs for the textile industry”. This is a Partner Event at The Green Week #EUGreenWeek - Europe’s largest annual environmental policy conference. This year it will be held from May 31 to June 4, under the main theme of “Zero Pollution”. 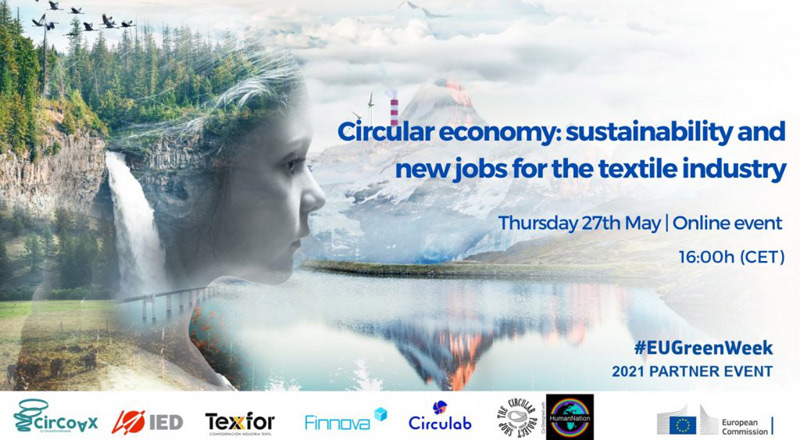 The aim of this event is to point out the problems of the current conventional fashion and textile industry, the second most polluting industry in the world, and to indicate lines of action to achieve the transformation of these sectors towards a circular model in its broadest sense, considering the environmental, economic, and social aspects.

The event, moderated by Carolina Lechado, director of Water and Circular Economy at Finnova Foundation, the event organizer, will be opened by Natalia Martínez Páramo, Second Head of Unit – DG Internal Market, Industry, Entrepreneurship and SMEs of the European Commission, followed by the intervention of Juanma Revuelta, CEO of Finnova, who will present the “Nextextilgeneration” platform, an initiative to disseminate information on the four COSME projects approved in the same F&T call.

In a first block, the conference will be attended by the different partners that make up the CirCoAX by CircularInnoBooster project who, in addition to presenting the project and encouraging interested SMEs and startups to join the accelerator to promote their innovative proposals, will delve into the key aspects of conventional industry that must be addressed under the prism of the circular economy. The workshop will be attended by José Francisco García, director of IED Innovation Lab, Adrián Noheda, EU Funding for Circular Economy of the Finnova Foundation, Paloma García, director of The Circular Project and president of SIC Moda, Sharam Yalda, founder of HumanNation, David Allo, sustainability director of TEXFOR, Confederation of the Textile Industry and Brieuc Saffré, CEO of Circulab. In addition to presenting the project, topics of interest will be addressed, such as the possibilities of applying for European funding to promote disruptive initiatives and the concept of regenerative economy that characterizes CirCoAX and that represents a further step in the circular model, creating value in society and the environment.

The implementation of this project contributes to achieving several of the United Nations SDGs (Sustainable Development Goals): end of poverty, zero hunger and gender equality, as well as decent work and economic growth; industry, innovation and infrastructure, responsible production and consumption, and partnerships to achieve the goals.

One of the key objectives, to which the project is strongly committed, is number 17, related to the creation of alliances. Cooperation and collaboration between public-private institutions of various kinds is the maximum guarantee that the project can be sustained over time, expanding its scope.

For this reason, the event will feature a block to give voice to “key players for the transformation of the F&T industry”, which will be attended by Tobias Biermann, from the delegation of the European Union in Colombia, Francisco Ferrando, head of Unit in the Area of European Programs of IVACE, Santiago Ramos Navarro, coordinator of the Green and Circular Economy course at the School of Industrial Organization and CEO Founder of Reloops and Tatiana Kaler, founder of the Mediapila Foundation. From each of their areas of expertise, they will provide their vision on how to achieve sustainable change in the fashion and textile sectors.

Furthermore, coordination between similar projects is also a vital requirement in the creation of synergies for the achievement of common goals, so, to conclude the event, there will be a round table with representatives from different COSME projects. This block will include the participation of Mari Saar, from the Fashion for Change project; Friori Zafeiropou, from Small but Perfect; Ingrid Willems, from the S4Fashion project and Clara Mallart, sustainability manager of the FASCINATE Project.

If you want to participate, Register here