The German supermodel - who has six-year-old son Caspar and four-year-old daughter Clementine with husband Matthew Vaughn - took a break from modelling after discovering she was expecting, but worried she would find it hard to return to work. 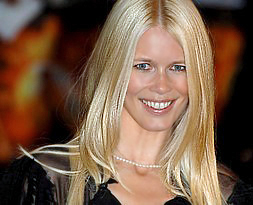 She said: "People forget that when you're pregnant you can't work, so you've sort of gone. When I started modelling again, someone said to me, 'Oh I thought you'd given up.' But it's not like other jobs where you can just continue. You have to stop because you literally can't fit into any clothes. You can't travel anymore. It was a sudden realisation of, 'Oh my God, what am I going to do?' "

Claudia also admitted she initially found motherhood very lonely because she had moved to England and didn't many friends.

She told Britain's Hello! magazine: "I'd just got married and moved to London and hardly knew anyone. All my friends were in Paris, New York or Germany and suddenly I had to start everything from scratch. I didn't really know London. So I started to explore. When you have a baby and they go to nursery, you start to meet lots of new people and suddenly this whole new world opens up.

"Years later I'm able to look back and think, 'That was a tough time.' But I've got all my friends and life is where I want it to be, so it's lovely now."