Over the years, the Manufacture Jaeger-LeCoultre has developed unique new gem-setting techniques that illuminate the finest contemporary watch creations. Born from the dextrous fingers of genuine artists, they celebrate the union of beauty and precision.

In jewellery as in watchmaking, success is consistently governed by an immutable and intangible rule: namely that achieving it implies long hours of work and patient humility. The visionary talent of the watchmakers of the Manufacture is matched by the virtuosity of its precious gemstone experts. After lengthy and meticulous training in traditional methods, there comes a time when the gem-setter is at last ready to make a personal contribution to this heritage that he will one day in turn hand on to future generations, even richer and more vibrant than when he received it from his predecessors. 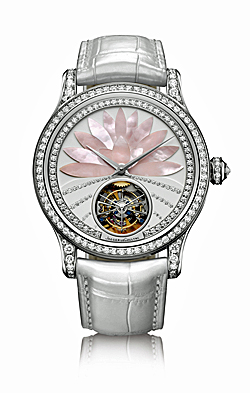 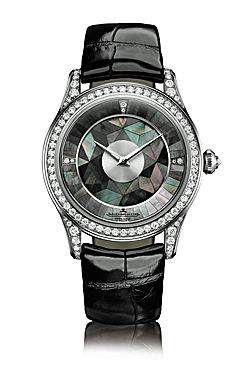 In 2009, the Jaeger-LeCoultre collections welcome a highly original line of Haute Joaillerie watches offering a contemporary interpretation of this extremely rare art. Lit up by the fire of precious stones, these new versions of three exceptional watch creations – Master Tourbillon Joaillerie, Master Grand Tourbillon and Master Twinkling – are all spectacular expressions of dazzling artistic inspiration. 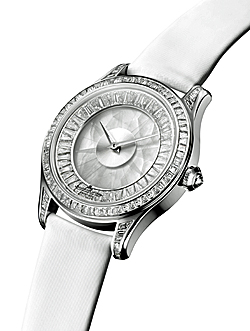 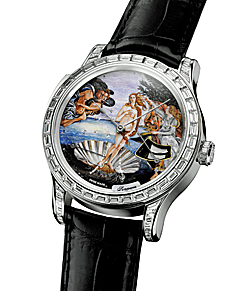 In the Jaeger-LeCoultre workshops, gem-setting is cultivated as an art in its own right. Far from resting on the laurels of their complete mastery of the conventional skills involved in the profession, the Jaeger-LeCoultre gemstone artists have developed special techniques intended to meet specific aesthetic demands and associating gem-setting, engraving and mother-of-pearl marquetry-work on watch dials. In order to give free rein to their creative talent, they can draw upon an exceptional range of abilities matched only by the expertise of the watchmakers within the Manufacture. In the mysterious domain of true beauty, form and substance go hand in hand. 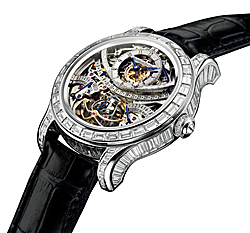 2 009 releases: the Master Tourbillon j oaillerie and the Master Grande Tourbillon j oaillerie The watch manufacturer which has historically handed women the key to the world of Haute Joaillerie by designing the first movements specifically intended to fit ladies’ watches, is now placing the enchantment of timepieces shimmering with mother-of-pearl and gemstones within reach of a masculine audience endowed with refined tastes.

On all these models, the tourbillon sits majestically enthroned at 6 o’clock, while the crown is topped with a diamond. Nonetheless, whereas the bezel is set with baguette-cut diamonds on the masculine version, it sparkles with brilliant-cut diamonds on the feminine creations. While complying with this fundamental distinction, the gem-setters and artists of the Manufacture have otherwise given full freedom of expression to the multiple shapes and colours. The black, grey or white mother-of-pearl inlays underscore the configuration of the masculine dial distinguished by the presence of a 24-hour subdial which disappears on the ladies’ watches in order to offer a generous space for the artists of the Manufacture to exercise their gifts. 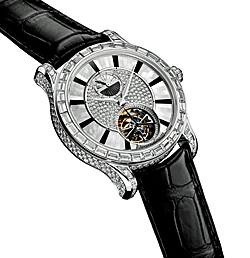 Speaking directly to women’s hearts, floral motifs are interpreted in mother-of-pearl and diamonds through compositions inspired by tulip fields or lotus flowers. Other models surrounded by a row of brilliants pay tribute to the art of black and white or coloured painting on mother-of-pearl, through creations irresistibly evoking water-painting techniques. These impressionist touches featuring delicate scrolling motifs and subtly shaded hues vividly highlight the stunning horological achievement represented by the tourbillon regulator.

On the men’s models, the geometrical purity of the decoration underscores the transparent presence of the tourbillon, which thus becomes a decorative motif in its own right. The association of watchmaking know-how with the traditional ornamental crafts lovingly preserved by the Manufacture gives rise to a fascinatingly beautiful masterpiece imbued with astonishing modernity. Setting the crowning touch to this year dedicated to Haute Joaillerie, the artists of the Manufacture have created a version entirely studded in diamonds, featuring a brilliant-set dial and a white gold case with full-pavé gem-setting extending over its sides. This artistic and horological marvel is adorned with more than 50 carats of diamonds.

Diane Kruger is the newest ambassador of Jaeger-LeCoultre watches. Internationally renowned German actress Diane Kruger became the feminine face of Jaeger- LeCoultre and wears its watches in her daily life and on the red carpet.

Photo: Diane Kruger, ambassador of Jaeger-LeCoultre, attends the show at the Cesar Film Awards held at the Chatelet Theater on February 27, 2009 in Paris. Diane Kruger wears for this occasion a Reverso Jaeger-LeCoultre watch.
Photo by Pascal Le Segretain/Getty Images 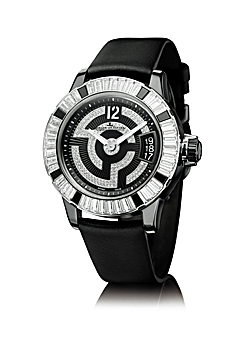 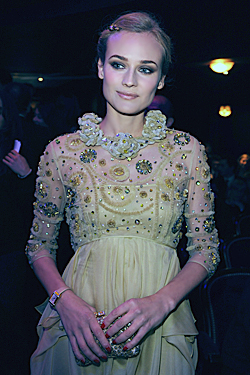