On June 13th and 14th, the 2009 edition of Le Mans 24 Hours is bound to thrill both motor sports enthusiasts and fine watchmaking devotees. Half a century after the extraordinary feat accomplished by Carroll Shelby and Roy Salvadori, who had snatched a complete victory at the wheel of the incredible DBRI, Aston Martin will once again be on the starting line of the legendary endurance race. For the occasion, the prestigious British carmaker will be entering three LOLA prototype cars that will compete in the Le Mans Prototypes (LMPI) category. As part of the three-year partnership signed between the two exceptional brands this spring, Jaeger-LeCoultre is celebrating this event by presenting two limited editions of the AMVOX2 Chronograph Racing model, which is still the only chronograph operating without pushpieces thanks to its revolutionary patented vertical-trigger system.

A winner to the core
For the first time, the AMVOX2 Chronograph Racing limited editions are distinguished by carbon fibre chronograph counters evoking several structural elements of the LOLA Aston Martin prototypes competing on racing circuits, such as the monohull chassis, brake discs and pads capable of withstanding temperature of over 300 degrees Celsius without the slightest technical hitch. There is indeed no shortage of common denominators between the latest racing car prototype developed by Aston Martin and the revolutionary AMVOX2 chronograph conceived by the “Grande Maison” in the Vallée de Joux. Echoing the V12 engine powering the two LOLA cars equipped with a six-speed sequential control transverse gear-box, the 751E chronograph movement is distinguished by the ingenious nature of its levers that transmit pressure on the watch glass to the movement in order to control the functions of the verticaltrigger chronograph.

In terms of their sturdiness, these two masterpieces of horological and automobile engineering certainly display extreme endurance characteristics. Since the temperature inside the cockpit can easily rise to 60 degrees Celsius during a race, Aston Martin has developed an air-conditioning system designed to guarantee a temperature of no more than 32° in the driver’s seat. As far as the AMVOX2 Chronograph Racing is concerned, its ability to run smoothly even in extreme conditions is ensured by a mechanism boasting the legendary qualities of reliability and sturdiness typical of all timepieces from the Manufacture and duly certified by the famous 1000 Hours control which subjects all Jaeger-LeCoultre watches to stringent demands. 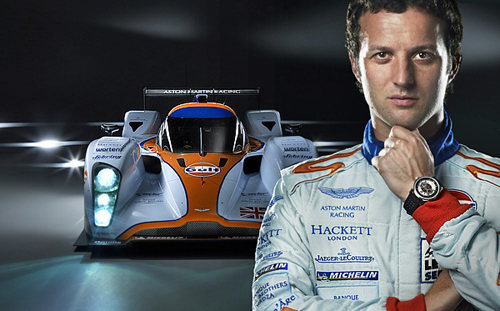 The fiery temperament of the AMVOX Chronograph Racing is revealed through a multitude of design details that predispose this ultimate sports chronograph to rise to the most daunting challenges. The 65-hour power reserve further lengthens the period during which the watch runs with optimal accuracy. The complex column-wheel and the elaborate vertical couplingclutch guarantee peerless timekeeping precision. The inertia of the balance is adjusted by four screws around the outer rim or “felly”, thereby ensuring the stability of its rating in all circumstances. And finally, the rotor is mounted on a ceramic ball-bearing mechanism that requires no lubrication and further enhances the long-term reliability of its operation.

The unmistakably competitive spirit inscribed in the genes of the engines on both these extraordinary technical accomplishments is also revealed on the face of the watch. The chronograph evers, hands and dial inscriptions, as well as the overstitching on the leather strap all echo the distinctive orange colour of the LOLA prototypes. The minute counter features a chequered structure evoking the black and white finishing flags, as well as the dates 1959-2009 celebrating the presence of Aston Martin Racing in Le Mans half a century after its spectacular victory.

The secrets of the vertical-trigger chronograph
Jaeger-LeCoultre is revolutionising the watchmaking world with its vertical-trigger chronograph system. Gone are the ‘traditional’ chronograph pushpieces and instead, an ingenious mechanism enables the wearer to start, stop and reset the chronograph simply by pressing on the watch’s sapphire crystal. A single movement, so natural that it becomes an extension of the hand, is enough to operate the various functions at any time and without disturbing the user’s concentration.

The chronograph function can be triggered and disengaged by pressing the sapphire crystal at the 12 o’clock position, while resetting is done in a similar way by pressing at the 6 o’clock mark. The vertical-trigger system ensuring this fabulous user-friendliness is based on a mechanism integrated within an unprecedented watch case. Inside, a clever ball-joint system allows both the case and bezel to pivot away from the shoulders of the watch, activating a series of levers that instantly transmits impulses that control the chronograph. Each lever is mounted on a miniature stainless-steel ball bearing containing seven 0.1mm-diameter balls.

The dial decoration revealing the movement reproduces the characteristic gridwork motif of car radiator grills and is framed by a black flange. The movement bridges and plates are coated with ruthenium, while the chronograph levers in orange eloxed aluminium appear through an opening between 4 and 8 o’clock.

The case-back is engraved with the inscription Aston Martin Racing, the dates 1959-2009, the Jaeger-LeCoultre signature and the lucky numbers 007 and 009 borne by the two LOLA cars
that made a fine showing in the Le Mans 24 Hours preparatory races.

So the high ambitions are matched by some favourable auspices. On April 5th 2009, Aston martin Racing won the 1000 km Catalunya race. Driven by Jan Charouz (CZ), Tomas Enge (CZ) and Stefan Mücke (DE), the 007 surged to victory after an impeccable race. The 009 car driven by Harold Primat (CH), Miguel Ramos (PT) and Darren Turner (GB) had stayed in the top three until an unfortunate spin off the track forced them to abandon the race just 40 minutes before the end. A few weeks ago, on the Spa-Francorchamps track in Belgium, the Aston Martin 007 came third, while the 009 earned an extremely honourable 5th place. 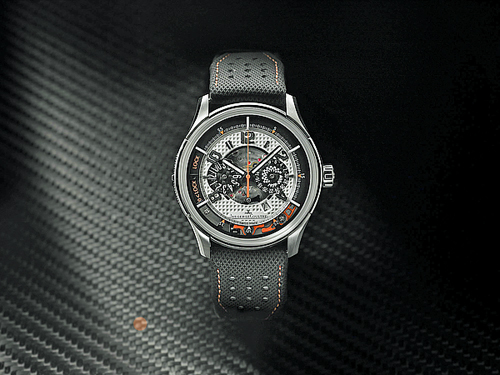 Innovation-driven ambitions
Developed on the basis of the 2008 Charouz Racing System LOLA, the new LOLA LMPI is propelled by the standard V12 engine that already enabled Aston Martin to win the GTI category with the DBR9 for the second consecutive time in 2008.

“2009 is a crucial year for Aston Martin”, said David Richard, chairman of Aston Martin, “since we firmly intend to once again win the title in this race that carries tremendous symbolic significance both for Aston Martin and for the United Kingdom. We are obviously well aware that reaching this goal will not be easy. Even though we have already won first place in the GTI category in the last two editions, it’s going to be tough to vie with the speed and endurance of the diesel prototypes that have already got an impressive track record behind them.

Nonetheless, we are confident that this competition will be provide an ideal opportunity to demonstrate the dynamism and the talent of British automotive technology”.

The first fruits of the partnership between Aston Martin and Jaeger-LeCoultre are thus extremely promising. This will hardly surprise connoisseurs who know for certain that these two prestigious brands are united by shared values such as their competitive spirit, their strength of innovation and their consistent determination to take up new challenges. Like the LOLA prototypes, the AMVOX2 Chronograph Racing is ready to measure new feats in the legendary Le Mans 24 Hours, just as each time that man and the incredible machines he perpetually reinvents and perfects continue to push through barriers hitherto regarded as insuperable.