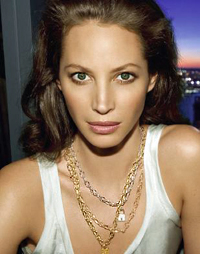 Christy is the latest veteran model to be chosen to front a campaign.

Sixties icon Twiggy has recently been unveiled as the new face of Olay - fronting a campaign for the skincare brand she first worked for over 20 years ago - while Linda Evangelista can currently be seen in campaigns for Prada and L'Oreal.

Naomi Campbell still makes appearances on the catwalk, while Claudia is to be the face of Alberta Ferretti's latest perfume.