The 'Mean Girls' actress - who already has her own range of leggings and fake tan - will work alongside Spanish designer Estrella Archs for the French fashion house and will be giving her own input on designs and styles. 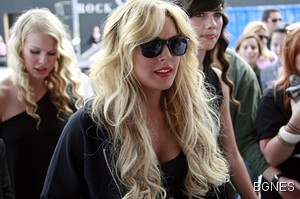 Of her new role, Lindsay said: "I kind of oversee everything Archs does, while working with her. Different generations have different ideas."

The 23-year-old star also added she is confident of taking Ungaro to a "younger place" with a harder fashion edge.

Designer Amy Molyneux - who already works for the French label - said of the appointment: "Everything we're going to get is going to be a plus. I think the noise level around Lindsay will be very, very big.

"She does have an eye for fashion. I like the way she dresses. Her house is a mini-department store. She changes outfits five times a day."

It had been reported Ungaro's head designer had threatened to quit the fashion house if Lindsay was appointed.

However, he recently said he would be staying "for now".