Sarah Jessica Parker wears a necklace worth almost $200,000 in the new 'Sex And The City' movie 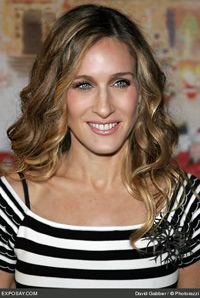 The 44-year-old actress, who plays fashion-conscious Carrie Bradshaw in the film sequel, has been seen wearing the Solange Azagury-Partridge piece on set.

Us Weekly magazine reports: "The necklace is worth $198,200. That's more than the median home price in the United States of $180,100, according to the National Association of Realtors."

The film's fashions have already caused raised-eyebrows, with the foursome pictured in a series of garish 80s-inspired outfits while shooting this week.

A number of plot-lines have already leaked, with Carrie and her husband Big (Chris Noth) apparently losing a large amount of cash due to the recession.

Kristin's character Charlotte York Goldenblatt becomes convinced her husband Harry is having an affair, but it turns out he is sneakily seeing a contractor who is building Charlotte's dream home.

Miranda Hobbes, portrayed by Cynthia, sets up a restaurant with husband Steve after leaving her career as a lawyer following a malpractice suit.