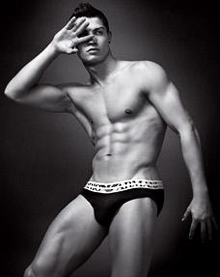 The Real Madrid footballer has replaced David Beckham as the face and body of the Italian brand.

Never the modest type, Ronaldo appears to have embraced his new modelling career with gusto, striking a series of moody poses and showing off a six-pack which would make Becks green with envy.

The 24-year-old reportedly maintains his chiseled abs by performing 3,000 sit-ups a day.

Giorgio Armani was full of praise for the "sexy" sportsman.

"Cristiano is a great-looking young man with the perfect physique of an athlete," Armani said.
"For me, he is the essence of youth - spontaneous, exciting and a real maverick. It is for his energy that I have chosen Cristiano to become the new face of Armani Jeans and Emporio Armani Underwear - for his youthful, exciting, and, yes, sexy attitude," added Armani.
Sources: telegraph.co.uk
Hits: 17582 | Leave a comment
Tweet
Author