Riccardo Tisci has opened up the often closed doors of fashion by introducing an albino model in the Givenchy's spring 2011 ad campaign.

After making waves and winning praise for casting Lea T., a transexual model, in his last few campaigns for Givenchy, the designer has asked an albino model named Stephen Thompson to front his latest Givenchy ads.

In the campaign are featured Stephen Thompson alongside with Daphne Groeneveld, French Vogue's 15-year-old cover girl. 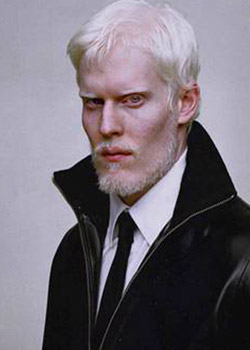 During an exclusive preview, Tisci explained that he's long admired albino people, reflected in the pale flesh tones that are recurrent in his fashions. "They're very near my world," he enthused.