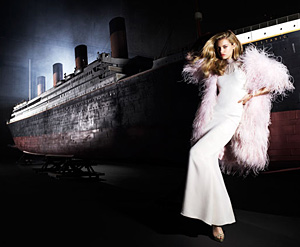 He's one of the most prolific directors of all time, and James Cameron’s career is the subject of a new pictorial in Harper's Bazaar's May 2012 issue.

To mark the re-release of "Titanic" in 3D, the monthly mag put together a fashion shoot, starring model Hailey Clauson and based on four of Cameron’s super-successful films.

The fashion glossy and Mr Cameron partnered to create a behind-the-scenes expose of the styles and props used in some of his most memorable movies, including the Oscar-winning film starring Kate Winslet and Leonardo DiCaprio.

Using real pieces from the sets of movies like Titanic, Terminator, Avatar and cult favorite, Aliens, the creative team collaborated on a set of looks inspired by the characters and themes of the popular flicks.