Rachel Bilson at the premiere of "The To Do List" 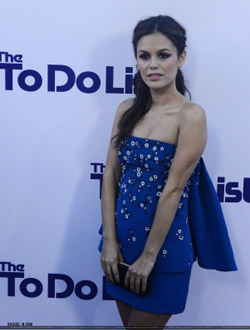 The actress Rachel Bilson came to the premiere of her new movie "The To Do List" with a dress made by one of her favorite designers- Oscar de la Renta.

The dress that she wore for the event is from the latest collection of the designer. It is a short, strapless, withdecorations around the bust and falling upper veil.

The appearance of the actress was completed with simple black accessories that perfectly combined with lavish ornamentation on the fabric of the dress.

Let's remember you who is Rachel Bilson.

Bilson grew up in a California show business family, and made her television debut in 2003, subsequently becoming well known for playing Summer Roberts on the prime time drama series The O.C. Bilson made her film debut in the 2006 film The Last Kiss and starred in the 2008 action/science fiction film Jumper. She is currently starring as Dr. Zoe Hart on The CW's Hart of Dixie.