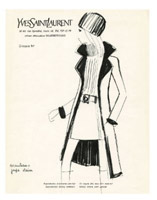 Unique sketches of costumes for theater and ballet productions made ​​by the famous French fashion designer Yves Saint Laurent are displayed on the web.

The access to the records was provided by the Foundation in the name of Yves Saint Laurent. The talent of the stylist was dedicated not only to fashion.

In 1959 Roland Petit ordered his costumes for the ballet "Cyrano de Bergerac" in which he performs the lead role. Then couturier was deluged by orders from other masters of the performing arts. Renee and Maya Plisetskaya,, Gerard Depardieu and Jeanne Moreau, and many other artists have played on stage with his costumes. "If I had not become a designer, I probably would go to the theater", says Yves Saint Laurent once.

In his memoirs he mentions that for the first time realized the beauty of the performing arts when he saw the sets of the show "School for Women" made by French artist Christian Berard . Then the prospective modeler realized that the stage piece plain fabric can magically become a royal mantle.