* The accent is on jersey and raw silk

Unprecedented parliamentary interest in fashion design attracted many members of the Bulgarian Parliament to hall 3 in the National Palace of Culture, where Evgenia Jivkova presented her collection for the season autumn-winter 2001-2002. The seats on the first rows were taken by Vessela Draganova and Liubka Kachakova, Emilia Maslarova and Ginio Ganev, Emel Etem and Kamen Vlahov. The Russian Ambassador Vladimir Titov with his wife also attended the show, wich marked the beginning of the fashion season in Sofia. The well-known Bulgarian fashion designer, who is nominated twice by the Academy of fashion with the fashion needle award, became also famous for becoming a member of the Parliament. Her collection was presented by Evgenia Kalkandjieva and Maria Petrova, for the formal wear and the sport line respectively.

The models that were presented (together with the bridal clothes) numbered 70. The lenghtened outlines and the gauzy and vapoury fabrics "partnered" in an interesting and fascinating way and lended fine erotic touch to the designer message. The combination of jersey and raw silk is now in fashion and is very practical, according to "Jeny Style". Having in mind the domineering invasion of the sport outline and the accessories in the womens suits, Jeni Jivkova doesn't overlook the classic formal toilet, but in her collection it is enriched with up-to-date motives and fragments. The original make-up of Kiril Chalakov also contributed to the spectacular show. He has drawn letters on the faces of the models. 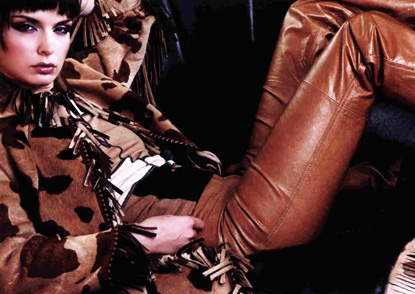