Julia Atanassova: You recently returned from Vienna, where you were invited to be a member of the jury of the most prestigeous austrian fashion competition, organised by Artfashion. Please, tell us in details about the event on 27 April 2002 in the capital of Austria. 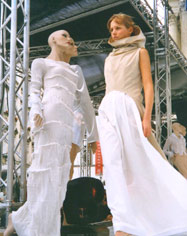 Lubomir Stoykov : I was invited by Mr. Iliver Sher, who asked me on behalf of the leaders of Artfashion (the biggest and authoritative fashion organisation in Austria) to be a member of the jury, which had to evaluate the works of the designers - participants in the "White satin" competition. This competition has a traditional character and it is on the initiative of the powerful company "Coral" - manufacturer of teh washing powder of the same name. The Coral fashion award has a considerable financial equivalent - the winner in the competition receives a money award measuring 3 500 euro.

Were there any other foreign representatives in the jury except you ? Whi were its members ?

- There were no other foreign representatives except me - as a representative of Bulgaria. I will announce all the members of the jury in the way the organizers did it in Vienna: Dr. Gerda Buxbaum - director of the fashion school Hetzendorf, Christine Friedel - president of the "Modeclub", Isabella Klausnitzer - fashion department at the Austrian daily newspaper Kurier, Anneliese Ringhofer - chief executive of the fashion magazine DIVA, Heidemarie Priller - director „Modeforum Vienna Fashion Support, Ossi Schellmann - events-organizer and gastronome, Wolfgang
Schwarz - CEO Look Models, Veronika Schwarzinger - V&V Galerie, Doz.Dr. Lubomir Stoykov - lecturer, journalist and producer from Bulgaria, Prof. Eva Willinger - "Landesinnung des Bekleidungsgewerbe Wien". I would like to emphasize that it was a great honour for me to be a member of such an authoritative jury.

How did the competition itself pass ?

- The intention of the organizers from Artfashion in partnership with the agency Look Models International was to arrange a big fashion show open-air in the heart of the Austrian capital - in the immediate vicinity of Hoffburg and exactly - near Burgtor - the famous emperor's palace in Vienna, on Michaelerplatz - where Kolmarkt begins (the busiest trade place with a lot of boutiques and shops). The show began in the early afternoon and continued until late in the evening. The organisation was perfect, the visibility (also for the accidental passers-by) was excellent and everything was transmitted on-line on Internet. Except for the competition (for which every participant had to offer one model in white), the designers presented self-dependent collections - spring-summer 2002 trends …

Who were the participants for the Coral fashion award?

What is the concept of the winning dress, created by Nomi Goldfarb?

- It was an ellegant long white dress. The designer herself explained to me that it is suitable for a wedding or another important occasion and it doesn't need ironing. Nomi Goldfarb uses a special technology to prepare the cotton fabric of the dress, following to main goals: the dress should be at the same time ellegant and perfunctory.

How did the bulgarian participant, the young Dessy Stoycheva, present herself ?

- She was not worse than the others, even in some aspects (sense of modern, expression and dynamics of the silhouette) she surpassed them. I had very pleasant feelings as a Bulgarian, when I saw her creations in the big competition of this concurs. On the theme "White satin" she offered and interesting and easy to remember dress, made of wrinkled fabric - cresh, which is easy to use in a different way, for example the hat can become a collar or something else…

Was the conceipt of the spring-summer 2002 collection of Dessy Stoycheva similar?

- No. Presenting her new mark "DesignD", she offers fresh and modern vision for the spring and summer this year. Dessi Stoycheva's collection contained 21 clothes and 4 bags made by her by hand, integrated by the common name "Brilliance of lines". The skirts, trousers, jackets, blouses and stays drew the attention with their freshness. Among the fabrics (mainly striped) dominated knitted textiles, taffeta, satin and silk. Probably the exact keyword for her construction is "asymmetry".

In a personal and emotional aspect - not as a member of the jury, but as an aesthete and special delegate of Nova Television, how did you feel and perceive this event in Vienna ?

- It was a spacial thrill to watch fashion in the open air! The emotion is different, the space and the specific cultural, urban, historic surroundings add to the vision in a unique and incomparable way. Watching the fashion show under the sky, the person is fascinated not only by the beauty of the architectural landmarks, he is attracted not only by the wonders of the modern technology (sound, light, multimedia), but he is also resigned to the passion of nature!.. Such was my feeling in the heart of the capital of Austria - on "Michaelerplatz", where I was in the end of april 2002 for the holiday of Vienna.

Has Vienna a future of a new world fashion center? 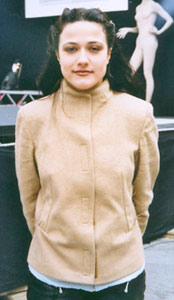 - I would like very much that it turns into a big center of the world fashion design and to return the glamour of its past glory. One of the main organisers and the owner of "Artfashion"- the man with inexhaustible energy Mr Oliver Sher said that the root of this idea is "to emphasize on the connection between fashion and art, as well as the aspiration for presenting the fashion creative potential of Austria - in the right moment, on the right place and on the right occasion". In my opinion the idea of the scheme of this event is connected with the strategic task in the near future Vienna to turn into one of the big fashion centers in the world. And besides with a Bulgarian participation!…