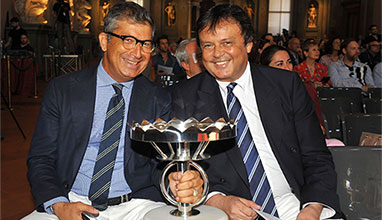 Who knows whether the textiles imprinting of his maternal family or the dash and artistic breadth of his father Gianandrea – one of the tutelary deities of 20th century music – had the upper hand, but it is certain that Pino Gavazzeni had a fortunate entrepreneurial intuition when in 1975 – in the wake of the affirmation of pret-a-porter garments – he created Bagutta which immediately established itself as an international reference point for high quality shirt-making for men and women that was synonymous with creativity and Italian style, dividing itself between its own brand collections and the production of garments for some of the greatest Made in Italy stylists. Now that Pino’s interest is mainly as a shareholder, his son Antonio and nephew Andrea are at the helm of the company, respectively as CEO and president.