The countdown to Christmas started today at the Oxford Street Christmas Lights Switch On Event at Pandora, an anticipated event which is broadcast and seen by millions around the globe. 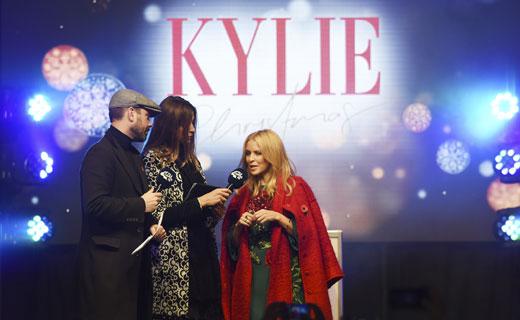 On switching on the lights Kylie said, "There's no way I thought I would be turning on the Oxford Street Christmas Lights. What an honour. It's the first for me so I'm really excited. To be involved in this is so much fun. I'll probably be down here on Oxford Street myself to get my last minute Christmas gifts."

Over the next six weeks Oxford Street and the West End are set to take £2.3bn through the tills, with tourists around the globe set to get into the festive spirit for their Christmas shopping in style.

Celebrating the official launch of the 2015 Christmas season, the unforgettable moment was hosted outside the PANDORA Marble Arch flagship store, celebrity presenters Dave Berry and Lisa Snowdon from Capital hosted the event, alongside a line-up of the UK’s hottest chart toppers including Fleur East, Ben Haenow, Gabrielle Aplin and Foxes.

For the first time ever, Oxford Street hosted the highly anticipated lights switch-on event on a traffic–free Sunday. Families, shoppers and visitors alike enjoyed their Christmas shopping in the enhanced space of a traffic-free environment, along with exclusive Christmas offers available from retailers for this special day only.

This year’s spectacular switch on moment and star studded show was more inclusive than ever before as the stage faceddown West Oxford Street with a series of on-street screens live streaming all the action for spectators and shoppers alike to enjoy.

New for this year, the lights display includes 445 never-seen-before golden baubles shining between the silver lights, inspired by the beauty of falling snowflakes. The lights now festoon the entire length of Oxford Street in a blanket of brilliant baubles for a truly magical Christmas atmosphere. 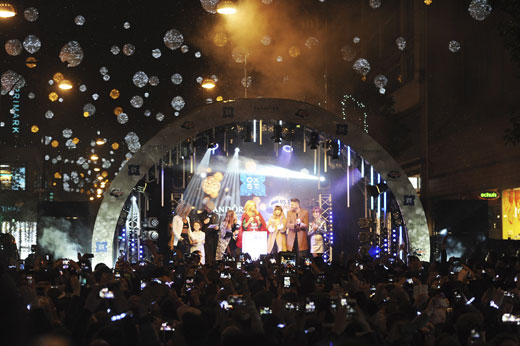 Steven Medway, Managing Director of Trading Environment, New West End Company, says: “We are thrilled that Kylie Minogue, a global pop icon switched on the Oxford Street Christmas Lights this year, one of London’s most iconic annual events. There’s a wave of anticipation on Oxford Street as the festive footfall starts to build, with our first ever traffic- free Sunday Switch-On moment and a series of exclusive one day only retail offers and events. The street is shining under our fantastic silver and gold lighting scheme and each store will now be revealing its Christmas window display.”