On the occasion of the Pitti Uomo 93 opening ceremony, the Premio Pitti Immagine 2018 to Brooks Brothers has been announced. The Award was given to Claudio Del Vecchio, chairman and CEO of Brooks Brothers, during the brand's special event at Palazzo Vecchio, on Wednesday January 11th. 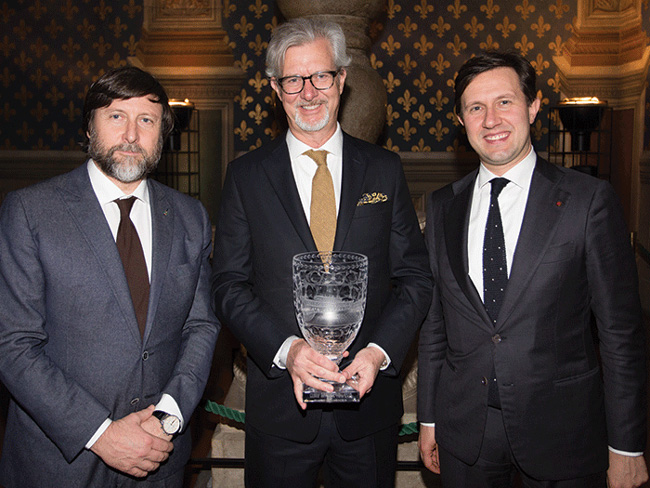 The oldest retailer in the United States is celebrating 200 years of tradition and innovation. Brooks Brothers has been growing constantly ever since it was founded by Henry Sands Brooks in 1818. From a small family-owned clothing store at the corner of Catherine and Cherry Streets in Manhattan, it has become a legendary global brand. Brooks Brothers has developed, shaped and defined American style. It was the first company to offer ready-to-wear clothing and its iconic items have been worn by generations of elegant and sporty men and women, including forty of the forty-five U.S. Presidents, Hollywood stars, creative talents and industrialists throughout the world.

The brand is a model of dedication to both the high quality of its merchandise and its customer relationships - an outstanding, internationally recognized example for its history and entrepreneurial values. Today, Brooks Brothers is led by Claudio Del Vecchio its Chairman and CEO, who acquired the company in 2001. He has recognized the spirit of innovation within the brand’s DNA propelling it forward and the company has become a business power for Italy as well. The celebrations for this extraordinary anniversary started in Florence, at Pitti Uomo. There is no arguing that the entire world and fashion with it have changed over the past two hundred years, but the guiding star, the distinctive golden fleece has remained the same: the symbol of quality. They are delighted to confer the Pitti Immagine 2018 Award to Brooks Brothers – for all the company has given and continues giving to fashion.