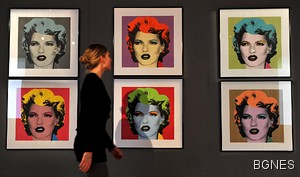 Despite David Bowie being named the 70s' second best style icon, men were generally missing from the survey, with soccer star David Beckham and singer John Lennon only pulling in small amounts of votes.

The survey was conducted by Clothes Show London fashion event, with the aim of discovering which famous faces have sculpted the British fashion industry.

The poll was taken ahead of next month's Clothes Show Style Awards, which will name the top fashion stars of 2009 in categories such as Best Dressed Man and Best Dressed Woman.