The 77-year-old designer - full name Valentino Garavani - is disappointed by the way people dress nowadays, adding most have no idea how to put together an outfit. 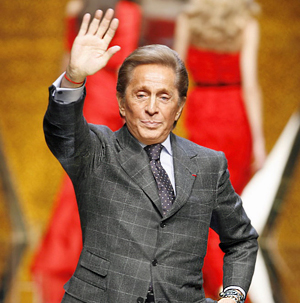 Referring to New York's Metropolitan Museum of Art's Costume Institute Gala which was held earlier this month, Valentino said: "I think now all the girls look very ugly. I saw the pictures of the Metropolitan gala evening last week and I never saw something more ugly, all the girls have their legs out with the most terrible proportions. No, no, no."

Valentino has been retired for over a year, but insists he is still as creative as ever.

He told Britain's The Observer newspaper: "I have so many ideas I could design a collection in two days, but I don't miss the work at all."

Although he is not designing clothes anymore, Valentino's life is still busy.

He recently attended the star studded premiers of 'Valentino: The Last Emperor', a movie which was shot over the last two years of his career.

The film follows the legendary designer and his business partner Giancarlo Giammettio as they attempt to adapt their vision to the changing fashion industry.

A new coffee-table book featuring photographs chosen by Giammettio - which is a cheaper version of a previous tome - has also been produced.