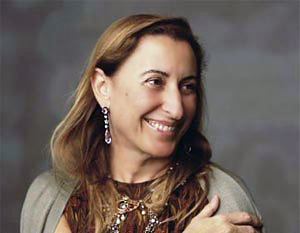 The Italian designer doesn't want to be like other designers and bask in glory after debuting her collections.

Miuccia - whose celebrity fans include Tilda Swinton, Victoria Beckham and Mary-Kate and Ashley Olsen - also revealed she likes her designs to be ironic.

She told CNN: "I like the irony in my work. It's very much about sometimes what I like, but sometimes also analysing what is trendy and why people like something. And trying to find an ironic way to look at it from outside. For instance, when I did the lace I asked, 'Why do women always like lace?' Things like pink roses, lace - women can't give up. I don't like things that are obvious. Just beauty by itself is too easy."

Some time ago the famous designer came with another interesting statement: "I wear clothes by other designers only if they are dead or poor!"