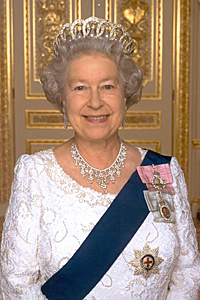 Real sensation in the fashion world has made the British Queen Elizabeth II, who appeared at an official reception during his state visit to Trinidad and Tobago live in a long snow-white lace dress embroidered with exotic birds and flowers. Dress of the British monarch designer Angela Kelly.

Elizabeth II is on the island nation, where the summit of the Commonwealth. In his work involved the Heads of State and Government of 53 countries which have close historical ties with Britain.

Witnesses say that the leaders of many countries were shocked when the last Friday in the hall, which hosted the gala dinner, became Queen Elizabeth II in an unusual dress of the monarch. The hem of her snow-white lace dress adorned with two bright birds – ibis, symbols of Trinidad and Tobago.

On the left side of her dress was embroidered diagonally across the long red-green branch of a wild flower, which is considered the national flower of the state in the southern Caribbean Sea.

The Queen chose a necklace of rubies with diamonds. Experts were also impressed by the fact that the head of Elizabeth II was her diamond wedding tiara, which she wears in the rarest cases. It is there that she arrived in 1947 at the ceremony the wedding with the Duke of Edinburgh.

As noted in this regard, specialists, 83-year-old queen is not lost interest in fashion and continues to be one of its influential setter.
Hits: 16853 | Leave a comment
Tweet
Author Fashion.bg