Vesselina Pentcheva understands what women crave and with her intuitive flair she combines the skill and artistry of tradition with up to the minute design.

Born in Bulgaria she presented her first fashion show in her hometown of Russe at the tender age of sixteen. In 1993 Vesselina moved to South Africa to study at the Gordon Flack Davidson Academy of Design, where she gained a mastery of the classical techniques of couture and graduated as top student in 1996. Marianne Fassler who inspired her sense of freedom and creativity then hired her as assistant designer.

Since setting up her own Design Studio in 2000, Vesselina has made her mark as an influential designer of luxurious wedding dresses but is equally well-known for her modern, elegant and sophisticated evening wear and couture-like quality ready to wear collections.

Celebrating the 10th year of her own studio, Vesselina has used this fashion week to re-launch the label, centring it as a high quality brand. The fifties was the inspiration when creating the strong feminine looks and elegant dress sense this collection projects.

Sourcing fabrics in Europe, she chose to use only natural fibres as they create the sense of rich luxury she needed. Wool fabrics included a heavy textured weave, fine grey suiting with various checks and tartans as well as black with a faint grey pinstripe. Silk fabrics dominate the collection, in satin, chiffon, fine mesh, taffeta and organza. Cotton twill suiting with velvet flocked flowers was also used. 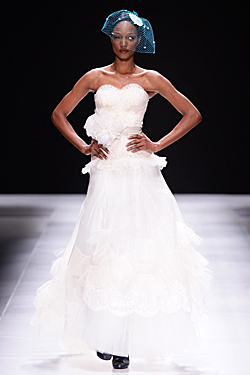 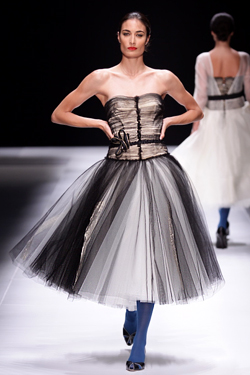 Black and white were the lead colours, and a polka-dot satin coloured as such was a sensation. There were also greys and some creams and browns. Turquoise was an effective accent colour in accessories, as lining or under semi-transparent fabrics. The silhouettes were all about the waist and creating ultra feminine lines.

Blue stockings were worn by all, and gloves featured extensively, ranging from soft brown leather elbow lengths, to short black driving ones and gold cocktail styles. Corsage's made of gathered fabrics, ribbons and metal zips were styled into neck-pieces, broaches and belt details. 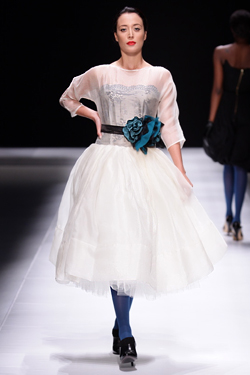 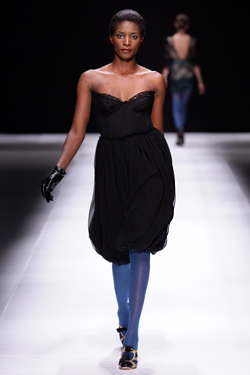 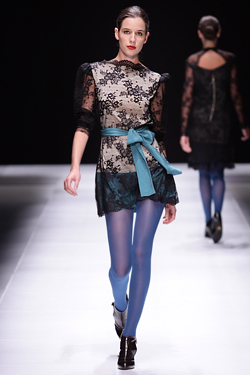 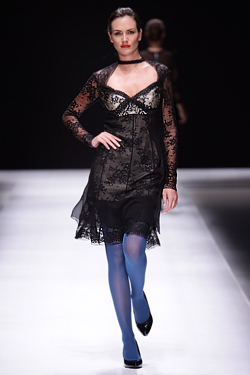 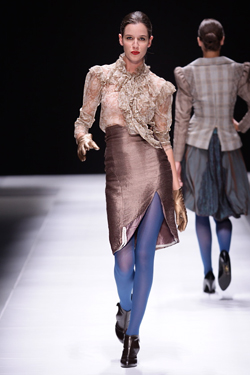 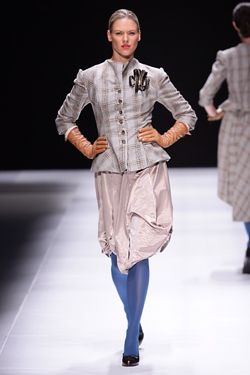 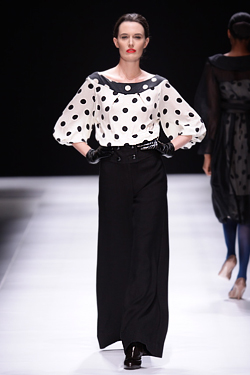 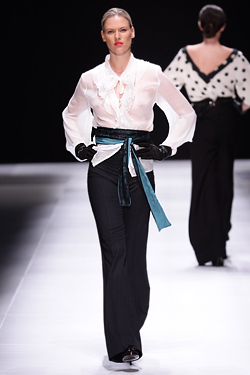