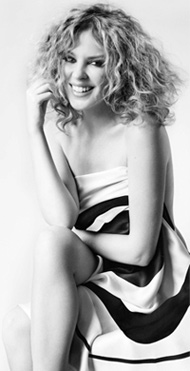 Kylie Minogue (41) is leading a breast cancer charity campaign for the first time after her successful battle with the disease.

The singer posed in a silk sheet with the logo of Fashion Targets Breast Cancer, for photographer Mario Testino.

Minogue was diagnosed with breast cancer in 2005 during the Showgirl tour. Later she was treated with chemotherapy and radiotherapy and returned to the stage to continue her tour in November 2006.

''It means so much to me to be part of this year's campaign for Fashion Targets Breast Cancer. I wholeheartedly support their efforts to raise funds for the vital work undertaken by Breakthrough Breast Cancer,'' she said.

Sienna Miller and Claudia Schiffer also posed with the silk sheets. The photos will be used in a media campaign, which will run until the middle of May.