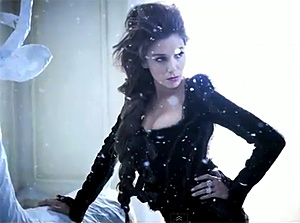 Desperate Housewives star Eva Longoria is on the cover of the December edition of Vanity Fair Spain magazine. The 36-year old actress gave an interview in which she has spoken for the first time about her burgeoning relationship with Eduardo Cruz, the baby brother of the actress Penelope Cruz.

After the end of her marriage with the basketball star Tony Parker the "desperate housewife" is lucky she met the Spanish singer, who is ten years younger than her.

Eva told the magazine: 'The truth is, I should be angry, resentful and disillusioned about relationships. But I'm not. I was very lucky to find Edu.'

The December edition of Vanity Fair Spain, with its cover article, titled Fearless Eva and the nice photo shoot, is available in selected outlets now. The pictures were taken by Art Streiber in Los Angeles.