Tania Sabkova is "Model of the Universe Bulgaria 2002"

* Her runner-ups are Diana Bekrieva (on the right) and Mladena Koleva (on the left). 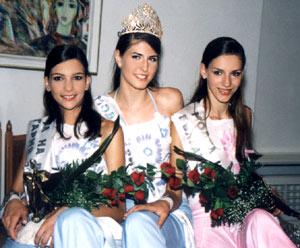 The 14-year old Tania Sabkova impressed the jury of the competition "Model of the Universe Bulgaria 2002" that took place on 7 july in "Arbanassi palace" near Veliko Tarnovo.

Tania is 180 cm high and her measures are 89-60-90. Last year she won the special award in the competition of Megatalent "Top model Bulgaria 2001".

In october in Ciprus Tania will represent Bulgaria on the world finals "Model of the Universe 2002".

In the competition participated 40 models. They were chosen among 110 girls that came to the final casting in complex "Maxi" near Sofia on 2 June. The main criteria for the participants was the height - minimum 170 cm.  Tania's runner-ups are Diana Bekrieva (on the right) and Mladena Koleva (on the left). 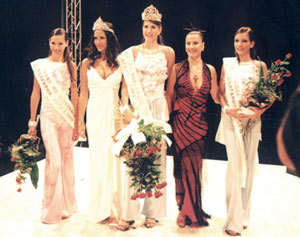 In the competition can participate girls form 14 to 27 years old. Last year for the title competed 42 girls from 35 countries. Miss Bulgaria 2001 Ivayla Bakalova won the international competition and became "Model of the Universe 2001".