Once again Bulgarian dress at the Oscars

The model is designed specially for this year's Academy Awards ceremony 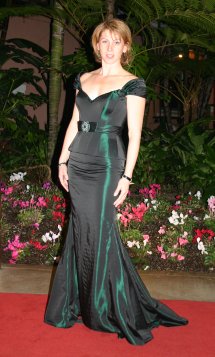 For the 2nd year in a row Bulgarian dress was worn at the Oscars Academy Awards ceremony. Once again it is designed by Virginia Zdravkova.

Sharon Waxman walked along the red carpet wearing it.
She is one of the most competent American observers. Since 2003 she is The New York Times correspondent for Hollywood. Waxman's is an influential and independent voice of the American film industry. Besides the Oscars she observes the biggest film festivals such as Sundance and Golden Globe Awards.

Sharon Waxman saw Virginia Zdravkova's models for the first time at the Mrs Globe 2006 Awards. She was impressed by the model's design and workmanship. At this very time she placed an order for the dress worn at this year's Academy Awards ceremony.

Sharon's dress was made by chameleon satin gradating from black into green nuances. Dress is decorated with a big brooch of Swarovski crystals. Jewelery and shoes match the dress. They are the same brand – Virginia Atelier. This dress had never been presented until now. Virginia Zdravkova made it specially for Sharon.