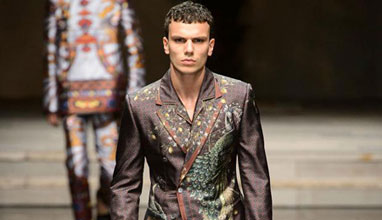 The Chinese Palace by Dolce and Gabbana Spring/Summer 2016

Chinese atmospheres and the Mediterranean tradition of Sicily come together in this Spring-Summer 2016 collection for men. 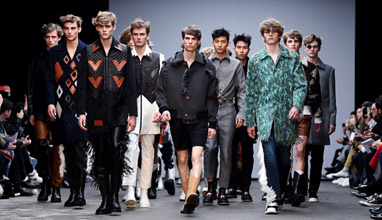 Chinese designer Xander Zhou studied industrial design in China and fashion design in the Netherlands. He established his label in 2007 and it is based in Beijing.
Trench coats and pyjamas are Zhou's trademark pieces.

The collection of wedding dresses of the Chinese designer Guo Pei was shown in Beijing. Well-known for her lavish frocks that are worn by celebrities on the red carpet, Guo Pei manages to infuse Chinese elements into the world of fashion.

"I meet all kinds of celebrities in my work, but what really touches me is designing for normal people. It is probably something that they will have once in a lifetime, and they will treasure it for a life time, and that design will bring them happiness," said Guo.

A look to the East with Daphne's models

The fashion compass of many fashion designers this season points East. Louis Vuitton, Vera Wang, Carolina Herrera and Celine - all of them included in their collections elements, resembling copies of Japanese, Chinese, Thailand and Vietnamese national costumes. The Bulgarian fashion brand Daphne, which is always in line with fashion trends also drops a hint at far East with elegant blouses with Japanese flowers and stylish belts on the waist. If you want to bring in your wardrobe some exotics and diversity, get the elegant blouses of Daphne.

In the year of the Tiger, the Chinese hieroglyph for the tiger is one of the most preferred tattoos for the Asian nations.

The Chinese hieroglyph is a magnificent symbol, embodying Earth Power and People's Life Defense. Tattoos with it carry a special symbolic. Pictures can be aggressive, playful, happy or evil, said the tattooist Rumen Somov from Stara Zagora. He also said that the hieroglyph is one the easiest making tattoos. It is believed that in certain degree the tattoo can influence positively or negatively its owner. According to Rumen Somov the symbol of the Tiger is beautiful in different colours, which shows the mood of the person. In antiquity, tattoos were served not only as an adornment but as a tribe's sign. People consider that they carry a kind of a magic power.