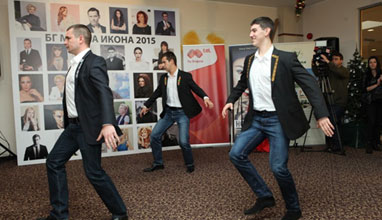 The official award ceremony of the most elegant Bulgarians for 2015 took place on December 10 in Vitosha Park Hotel .

The award was presented by the brand-manager of Marilyn Slims - Milen Shterev.

The folk star was dressed in a tempting gown, which was lace from the waist down. Her husband - Dimitar, was also there.

Bulgarian pop-folk singer Galena with attractive visions in a photosession

Bulgarian pop-folk singer Galena provokes again with interesting and original visions. She recently made a photo session for the November issue of "Kosa i krasota" magazine (Hair and Beauty).

The hair dressing is made by the coiffure Joro Petkov, the make-up - by Slav and the photographs are shot by Kostadin Krastev.

The photo session is a part of the returning of Galena on the music scene after she gave birth to her son Stefan.