BGFN MAGAZINE >> News >> Events >> Ecology and Fashion at Milano Unica: the combination is the topic of the moment

Ecology and Fashion at Milano Unica: the combination is the topic of the moment

Ecology and Fashion: the combination is the topic of the moment. This is not a passing shift for environmental issues but it is an urgency that requires commitment and dedication by all. Above all it involves fashion that uses its language to affect not only aesthetics, but also lifestyles and ways of thinking.

Hence "Milano Unica: Save the Planet" was conceived, a "green" slogan that heralds a manifesto of awareness of the major issues related to the environment. It is almost a visionary advertisement that draws attention to the cornerstones of life: Water, Air and Earth.

Water, Air and Earth are, in fact, the themes of the trends for Spring/Summer 2019. From these three elements we allowed ourselves to become inspired, starting from what classical writers, scholars and scientists have drawn up, to reach creating three purely fantastical narratives, each of which spotlights a well-known personality.

"For 2019 Spring-Summer trends we believed there was the need to create three "short stories" on themes as well as iconic figures with a strong connection to Water, Air and Earth. The aim is to give a vision of the future as a synthesis of tradition, respect for nature and faith in technology that improves the quality of life" asserts creative director Stefano Fadda.

For this edition, therefore, the elements Water, Air, and Earth are paired with three types of personalities: the great French oceanographer Jacques Cousteau who championed, back in the day, ecological battles defending deep-sea flora and fauna; the Russian dancer Rudolf Nureyev with his ethereal, agile and poetic dance in a space evoking the Northern Lights, and finally the Maasai, a nomadic people, proud of their traditions but, above all, inextricably connected to the Earth, mother and origin of all civilisation.

The following three stories were conceived in this way: "Jacques Cousteau and the mystery of Atlantis", "Nureyev and ballets in a boreal space of the Northern Lights" and "the Maasai and the victory at Zabriskie Point" which coincide with as many themes: Organic Underwater Neoclassicism, Cyber Glam Hyper-futurism, and finally Minimalism and Tribal Purism. 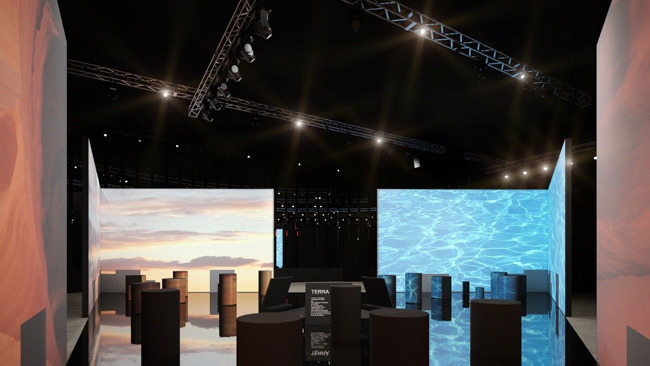 The theme of Water through the imaginative rediscovery of the legendary city of Atlantis by Cousteau introduces us to the human wonders of Hellenic civilisation and the natural seabed. The submerged nature reveals all the elements of the nautical world, from waterproof sails to lines and ropes, to winches, to masts and to rudders of wood and titanium, up to reaching all inventions tied to the underwater world, like wetsuits, deep diving suits, and all high-tech materials in continuous evolution. As for Air, Nureyev's pirouettes lead us into a space where his hyper-technological, glam jumpsuit is a reinterpretation of the performing costumes in a futuristic rock style while the materials evoke an imaginary impalpable lightness, layered tulle, kaleidoscopic satins in iridescent colours, bright micro applications and details with lunar reflections.

Thinking about the Earth leads us to the Maasai people, here represented as cricketers, the sport acquired during British colonisation. The match is at Zabriskie Point, in that Nevada desert to which the film director Michelangelo Antonioni introduced us as the place of freedom and love. The vision here is purist and proposes a new minimalism with fabrics like cottons and wools, silks and linens, in "virginal" version, namely organic, wild, although soft and lightweight.

Tribal graphics are flattened not only with colours but also through the most linear and primary shapes. The embellishments also become solid lines in darker shades, but always tone-on-tone or black.