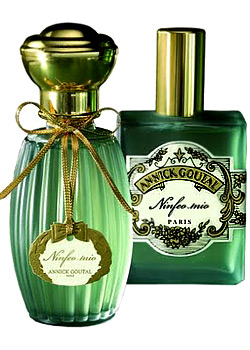 The famous French fragrance house Annick Goutal released its latest creation - "Ninfeo Mio" which smells like a unisex and is being marketed as such. As always with Annick Goutal unisex fragrances, you can pick whether you wand the girl or the boy bottle, but you will get the same juice either way.

This fragrant composition introduces light and luminousness in top notes which incorporate cedrate, Italian lemon and galbanum, which evoke first rays of sun in early dawn, fresh and clear air and birth of a new day.

The fragrance is inspired by and named after the Gardens of Ninfa in Italy, near Rome. A "ninfeo" or Nymphaeum or Nymphaion is a sacred temple from the antiquity consecrated to water deities or nymphs and consequently built near fountains and springs. Ninfeo Mio means something like "My Sacred Temple to the Nymph of These Waters".