Gisele Bundchen will teach her husband how to model

American football star Tom Brady, who married the Brazilian beauty in February, doesn't feel comfortable posing for photo shoots and hopes Gisele will boost his confidence in front of the camera. 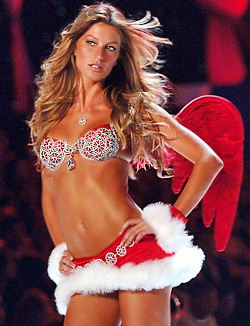 He said: "When I am out on the football field I have so much confidence in what I am doing. With photo shoots, I don't know what I am doing. I'm at the whim of the photographer and the crew.

" I should probably ask her for some help. She does tell me to have fun and to approach it in the third person, almost like acting. She makes it look so easy."

Tom, who is quarterback for the New England Patriots, believes being a supermodel is a much tougher career than being an athlete.

Tom has also revealed the responsibility of helping to raise his two-year-old son John made him realise he was ready to marry Gisele.

The 32-year-old sports star discovered his ex-girlfriend Bridget Moynahan was expecting his child soon after they split in 2006, and when he was already dating Gisele.

He admits he was relieved Gisele agreed to stand by him and play a role in his son's life.

Tom told Details magazine: "You're talking about a life. It forced me to grow up and I've learned about my wife and how important she is to me. You see what she is really about. But that's not what she wanted either.

"We have been through a lot together. That has been a nice settling part of my life as well."