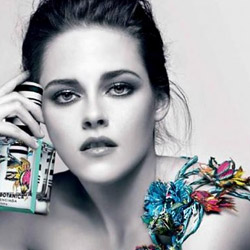 The American actress who is best known for playing Bella Swan in The Twilight Saga is the star in Balenciaga's advert, presenting its newest fragrance - Rosabotanica.

The 23-year-old Stewart is topless in the black and white photos. She is 'wearing' only some beautiful flowers, which burst from a vine and clings to her bare skin.

The idea of the photographers is to create a really exotic and sensual concept for the presentation of Rosabotanica perfume.

Kristen has been the face of Balenciaga fragrance since early 2012 and she is involved with the fashion house because of her friendship with former creative director Nicolas Ghesquiere.