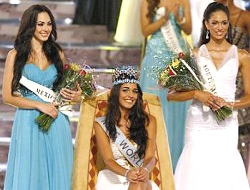 23-year-old representative of Gibraltar Kayane Aldorino was chosen as the most beautiful woman in the world for 2009.

The ceremony took place on 14 November in Johannesburg, South Africa.

The leggy brunette, dressed in white-lace evening gown, was crowned as silver confetti rained down onstage around her.

Kayane Aldorino was selected from among 112 beauties from around the world, out of which was our Miss Bulgaria 2009 - Antonia Petrova.