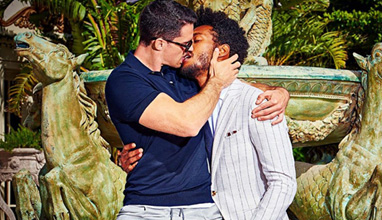 A Netherlands-based men's suit company has faced a social media backlash in response to an advertising campaign featuring men embracing. For the ADV Campaign of his Cruise 2015 collection the designer chooses to immortalize the ironic and glamour soul of the collection through the unconventional eye of the American photographer Dylan Don. As set a maxi studded “photobooth” which perfectly reflects the pop/rock mood of the campaign. Protagonist of the shooting is the gorgeous topmodel Roxy Kiscinska.

The shoe retailer United Nude created a special model of shoes, inspired by the ad campaign where Lady Gaga is presented as naked colossus with an army of tiny good looking menfolk scaling her body.

The shoes have 12 inch high heels. They are available for purchase at the United Nude flagship stores in Paris, London and Amsterdam.

The 26-year-old singer and songwriter will grace the latest campaign for the high street chain H&M.

The theme of the campaign is a modern and feminine woman with a soft attitude. Curves and waist are important in the silhouette for this autumn, with a focus on knitwear and tweed. The colours include powder tones and accessories in wine red.

The photossesion was made against a background of deep Caribbean sea and shot by photographer Michael Janson. On some of the photos Gizele has teamed with sexy Canadian model and actor Noah Miles.

The ad campaign will be launched this fall and will give the golden opportunity for the band "Thirty Seconds to Mars" to become a part of the fashion business. Jared defines himself as a naturally curious and constantly seeking new and innovative ideas.

Kate Moss has created a jewelry line for the chain stores Topshop and the presentation show will coincide with the latest clothing collection, which will also be the last that the British model creates for the retail chain, informs Philip Green, the owner of Topshop retail chain, one of Kate’s good friends.

Kate Moss has signed on to be the new face of Vogue Eyewear.

The British model – who has previously appeared in glasses ads for Versace, Yves Saint Laurent and Just Cavalli – will be seen in shots by photographer Mario Testino in spring 2011.

36- year-old Kate replaces Brazilian beauty Gisele in the campaign, which will also feature a selection of four sunglasses and two optical frames chosen by the model named Kate’s Favourites.

Jennifer Lopez and her twins will be stars in Gucci Ad

Jennifer Lopez and her twins, Max and Emme, will be the new stars of Gucci's debut childrenswear campaign.

The adverts were shot by famous photographers Mert Alas and Marcus Piggott in Mailbu in July and feature beach side shots of Lopez and her two-year-old twins, decked in the label's apparel and accessories.

According to WWD, Gucci will also make a donation to UNICEF and the Maribel Foundation - a charity founded by Lopez and her sister, Lynda, which raises money for health care for women around the world.

Charlize Theron and Orlando Bloom have been announced as the new faces of Japanese fashion brand Uniqlo.

The Japanese fashion retailer has named the stars as the global brand ambassadors for its new 'Made For All' collection.

The pair will promote the company's new tagline, which focuses on its commitment to providing clothing for everyone, regardless of nationality, age, occupation or gender, with the new advertising campaign expected to be unveiled in the autumn.

Thierry Mugler has finally confirmed the rumors – Nicola Formichetti, most known as Lady Gaga's stylist, is the new creative director of men's and women's departments. Although Nicola is fashion consultant of worldwide famous like Scarlet Johanson and Ashton Kutcher. As a stylist capacity he has worked out ad campaigns for Prada, Missoni, Iceberg, Alexander McQueen, Issey Miyake and Gareth Pugh.

"We were looking for a young talent who could really bring new energy to the brand," said Joel Palix, director general of the Mugler company.

Scarlett Johansson may be has stunning looks but when it comes to selling cosmetics, there is no such thing as natural beauty.

Actress Scarlett Johansson, the face of the Italian fashion label D&G, has been subjected to heavy retouching for the new makeup ad of the popular brand.

The new look of the star is a stark contrast to last year’s Marilyn Monroe-inspired look, where an angelic Scarlett shows off red lips, posing against white satin sheets.